After I posted my 101 Things list, a few people asked me what I was going to tackle first. I got started on a few of them this weekend. I thought I should get off to a strong start since some of the things on the list will take longer to plan and complete than others.

I purchased a used elliptical machine this weekend, so the first goal I’ll be tackling is “Work out at least 3 times a week for 1 month.” The purpose of buying the machine is to go for longer than that, of course, but at least I’ll be able to cross this item off my list. I have a fitness room at my workplace and I went there a few times, but with my current schedule it was too hard to get up the motivation to go before work and then shower and change before starting my shift. (Especially since they only have one elliptical machine and the last time I went in, it was already in use. Walking in and seeing someone else on “my” preferred machine, I knew right away that I’d have to take alternative measures.)

I found the elliptical on Craigslist. I found my current apartment and my current job through postings on the DC area Craigslist, but I’d never actually bought anything from someone, using the for-sale section, before this weekend. There’s a lot of stuff on there, so I usually only browse through when I have something specific in mind.

I had been looking for an elliptical for the past few months, and also for a tall, bistro-style table for my eat-in kitchen area. (I already have two stools, so I’d like to get a table—it will give me an excuse to stop eating on my bed while I’m on the computer. My problem is that I don’t have room in my car to bring a table back to my apartment if I were to find something. Not unless it could be disassembled. I’ll probably have to end up buying one from a store, and either have it delivered or bring it home in a box and put it together myself.)

I wanted a used elliptical because I know there are people out there who get rid of gently-used (or hardly ever used) machines, and it would be cheaper than buying one brand new. It would also save me the trouble of having to put it together myself. I ended up finding a small model, which is what I was looking for since I can put it in a corner of my bedroom without it overwhelming the space too much. It’s only a month old (the owner was getting rid of it because she wants to buy a treadmill and train for a marathon instead), and I saved $50 off the original purchase price. 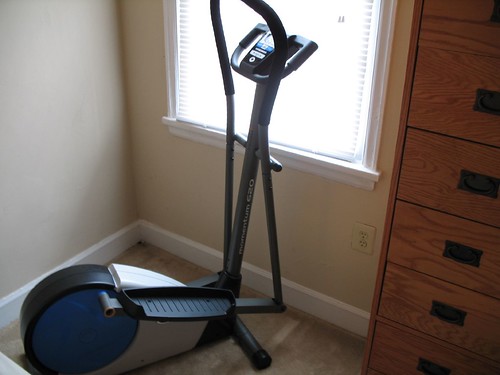 Also, since this was my first time buying something off the internet where I had to go to somebody’s house to pick it up, I left a note on my bed “just in case,” since I hadn’t told anybody else what I was doing. “Elliptical—Craigslist,” I wrote, as well as the address where I was going.

I was able to fit the elliptical in my car (a two-door Civic!) once the long piece that holds the handlebars in place was disconnected. The bottom section was pretty heavy (it was carried to my car by the owner’s husband). I knew it would be difficult to remove from the backseat—which I’d flattened down—on my own, but when I got back home I immediately started attempting to dislodge it.

By the time I got it out of the car and onto the ground, someone walked by and I decided to ask for assistance getting it inside my apartment. I wasn’t parked very far away, but I would’ve had to struggle with it over an expanse of sidewalk, a short flight of stairs, and the opening of two different doors. (I’m not sure how heavy it is. I could have carried it, but with difficulty.) It turns out the nice gentleman I flagged down for help didn’t speak English, but after indicating through a series of hand motions that I wanted to move this piece of equipment over there to the apartment, he took one end and helped me take it inside.