In the fall of 2004, when I was a senior in college, I spent a semester studying abroad in Amsterdam. As cliché as it may sound, the experience really did change my life. Since it’s impossible to completely prepare yourself in advance, you have to be adaptable — you’ll be faced with situations over and over which are different from anything you’ve seen or had to do before.

I think traveling abroad is a great life experience for anyone who’s able to do it; whether it comes about through school, work, or an extended backpacking trip. If you’ve never been abroad (as I hadn’t before that trip), taking advantage of the opportunity while you’re in college is a great way to go. Why? Because for many people, life circumstances are bound to get in the way later.

After you graduate, there are so many important choices to make: Where do I live? What kind of job do I want? And as I later discovered, after I’d finished college and contemplated the possibility of finding a job overseas, it’s a lot harder to initiate something like that when you’re just starting out in the job world. Unless you want to work as a volunteer, or find a job once you arrive in a country, it’s really hard to obtain a work permit if you’re not in a high-demand field.

After spending five months in a foreign country, I can say firsthand that it’s an entirely different experience to stay in an unfamiliar place for a long period of time, as opposed to spending just a few days. (And I’m sure any long-term expats reading this are thinking, “Five months! Try five YEARS.”) As nice as it is to spend a few days in a foreign city, it’s inevitable that you’ll feel rushed as you go from one thing you have to see to another, or you’ll leave something out because you just don’t have the time.

In addition to meeting Dutch people, I became acquainted with students from all over the world — French, German, Australian, Italian, Brazilian. And I didn’t just have classes with them…I lived with them. We were in a dorm-style building, with one kitchen and two bathrooms per hall. (The communal living itself was something I had to get used to; even though I was a senior in college at the time, I’d always lived off-campus.) So the fact that I was suddenly living not only with a lot of other people, but people from a wide variety of countries, was quite different for me. 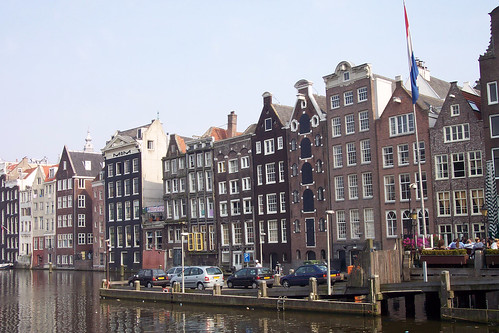 However, no matter how different it was — and at times how challenging it could be, as well as frustrating — I wouldn’t trade it for anything. After all, if I hadn’t gone to Amsterdam, I would have never been able to defend myself against being called a typical American. I would never have spent all those hours wandering through the city’s streets and crossing the canals. I wouldn’t have felt the ferociousness of the wind in that flat, flat country (sometimes I literally had to stop and brace myself so I wouldn’t be blown over). I wouldn’t have attended an early-December Sinterklaas celebration, or traveled to Geneva, Brussels, London, and Paris.

In the Netherlands, I rode on the narrow back seat of a bicycle for the first time — more accurately described as a “ledge” than a “seat” — sitting with both legs on the same side. (The best way to mount: have the driver push off and being pedaling; run after them and then attempt to sit down — hopefully you land on the seat without causing an accident.) It was a harrowing experience, and I always felt like I was on the verge of toppling off the bike (and yes, after consuming alcohol and riding home late one night, my friend and I did indeed flip the bike and we both took a tumble). We got back on afterward and continued on our way, but I never did enjoy that particular biking experience and I can’t say I’m sad about not getting to repeat it on a regular basis.

Have you studied, traveled, or worked abroad? What was your experience like?

When People Travel and Live to Tell About It

Michelle Obama and the Positive Influence of Arm-Lust