I was sitting on the couch a few days ago, typing on my laptop, when I heard a loud shriek. My roommate was across the room watering a plant, and she’d spotted a big, ugly bug hanging out on one of the curtains. I got up to take a look…and yes, indeed, it was quite ugly.

The sound of her shriek was still ringing in my ears, so I was surprised when the next thing she said was, “I’ll take care of it!”

As I settled back on the couch, I could hear her rummaging through the closet in her bedroom. The next thing I knew, she’d reappeared in the living room with a strange-looking device: 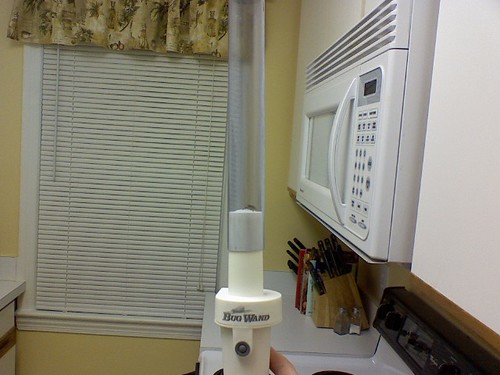 It’s called a Bug Wand. I had no idea such a thing existed. She flipped a switch, the vacuum started, and she sucked the bug right off the curtain. Then she took it outside and released it.

I laughed my ass off when I first saw the thing, but still…technology. Gotta love it.

THEY EVENTUALLY FOUND THE RIGHT PLACE