Advantages of Working Out with Weights

(This is cross-posted at BlogHer.)

I was washing my hands in a public restroom not long ago when I saw a woman standing at the row of sinks along the opposite wall. Her back was to me, but I noticed she was wearing a sleeveless shirt — and what stood out to me were her toned arms. Her muscles weren’t immensely large, but they were well defined and I could tell she’d put in some effort to have them look that way. I made the split-second decision to tell her what I’d noticed: “You have nice arms,” I said. And you know what? By saying what I did, I made this woman’s day.

A huge smile appeared on her face and she walked over to stand next to me. She told me she’s always had muscular arms, but up until recently they were just thick — she’d been putting some extra work into their appearance and she was proud of them. “As you should be,” I said. “You look great.” She thanked me at least three times.

I had a smile on my face when I left the restroom, too. It wasn’t just because I felt good about giving this woman a well-received compliment. It was because I knew how she felt. I know how awesome it is to receive a compliment when someone notices a positive change in your appearance; something you’ve worked hard to achieve. I had a similar experience late last year, after I’d been working out regularly with weights for about six months. I met up with a friend I hadn’t seen since the previous summer, and her reaction (“You look great!”) made me feel like a superstar.

Sure, we work out for ourselves. But when people actually notice…and tell you so? We are human creatures and we tend to enjoy a good compliment. In addition to doing exercises for our arms (and chest, and shoulders) so we can easily lift heavy boxes, we also do it so our upper bodies will look good in a tank top. We do squats, leg presses, and lunges (among other things) to form shapely legs. And why else would we suffer through core exercises unless we cared about flattening our midsection?

Some people really love working out with weights. Some people hate it. Sometimes people think they hate it until they get someone (like a friend, or a personal trainer, or even a staff person at a gym) to show them how things are done. As for me, up until this time last June I’d simply never worked with weights at all (unless you count a few sporadic, half-hearted attempts at bicep curls with a 5-lb dumbbell).

Working out with weights has done more to transform my body than anything else I’ve ever done. I do cardio as well, but unless you’re specifically trying to lose a lot of weight by burning extra calories, you’re just not going to see the same kind of physical transformation that you will with regular weight training. I like being able to feel the muscles in my legs. I like being able to squeeze my arms and not have them go squish-squish — there’s an actual mini-muscle there now, which I’ve never had before. 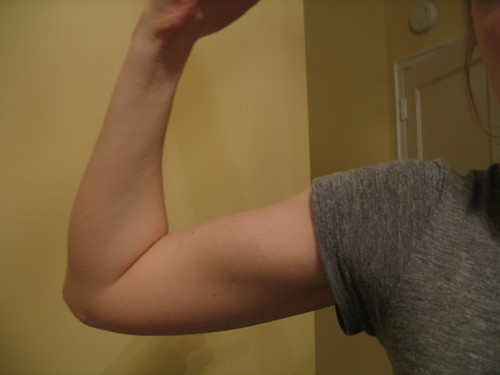 In addition to the benefits on the outside, I’m absolutely certain becoming physically stronger has made me mentally stronger as well. I feel more confident. It doesn’t bother me to be the only women in a weight room filled with grunting men. If someone tries to help me carry something heavy, I feel awesome when I’m able to say, “No, thank you. I’ve got it.”

Weight training: love it or hate it? If you’ve been working with weights on a regular basis, have you noticed a positive difference (either internally or externally)?

We May Prefer to Live Alone, But is it Affordable?

Is It Really Possible For Us to Love Our Bodies?