Confidence: Hold Your Head Up and Keep it There

(This is cross-posted at BlogHer.)

In July of 2007, I attended the BlogHer conference in Chicago. While I enjoyed the conference itself (and met a lot of very cool ladies), I didn’t have a very good time overall. You see, I was preoccupied — and when a person’s thoughts are a thousand miles away, it’s hard to concentrate on the awesome time you’re supposed to be having.

I wish I could say I was preoccupied in a good way, but the truth is…I was going through an unpleasant time in a relationship. It was the first time I’d left my home in Virginia since he and I had started seeing each other, and he thought the fact that I’d left (for 3.5 days, mind you) meant I was suddenly going to become a world traveler or something — and he couldn’t handle that. So I spent a fair amount of time trying to convince him otherwise.

(And yes, just in case you’re wondering — I look back on this situation now and say, “What the hell was I thinking?“)

While I was at this conference, I was trying to assure him that leaving for a few days didn’t mean my feelings for him had changed. If there was a break, I’d go outside and call him. When I was sitting at a table inside, I’d send a text message.

There was one woman who witnessed this behavior and called me out on it — BlogHer Community Manager Denise Tanton. I’d known her via her blog and through email for at least six months, but it was the first time I’d met her in person. Once she found out I was spending so much time talking to a guy, she had no problem yelling “Patriarchy!” every time she saw me with my phone in my hand. (For those of you who have met Denise in person, you’ll understand the humor behind that word…it’s something she says quite often.)

I would respond, “Oh, no, Denise. It’s not patriarchy!” Or I would just smile and go back to talking, or tapping on the tiny keys of my phone.

A year later, traveling as a single woman once again, the next BlogHer conference I attended was so much better. Denise was the first person I recognized when I arrived at the hotel in San Francisco, and one of the first things she asked me was, “You’re not going to be on your phone the entire weekend, are you?” I assured her I would not, and indeed the only time I used my phone over the next few days was to get in touch with people who were actually in attendance at the conference. It was wonderful.

All of this came rushing back a few days ago when Denise sent me a headshot that was taken at the conference last summer. My previous profile photo — the one I’d been using on the BlogHer site for the past few years — was just a straight-on shot of my face. I like the new one, but since I’m holding my head so high I was afraid I might come across as a bit “snotty.” 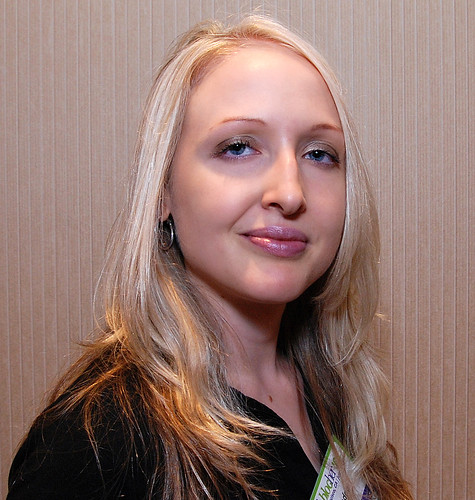 (Childhood memory: walking around with my head held high, age 12. I was tall, 5’9″, the same height I am right now. I was told on multiple occasions by people in the church my family attended to “stop thinking so highly of myself.” Apparently some of the ladies thought I was stuck-up because I wouldn’t walk with my head down and my chin in my chest.)

I emailed Denise: “I think I look kind of snotty with my head all held-up high like that, but I’m not opposed to it.”

Denise’s response: “I really liked you with your head up high. I don’t think it’s snotty at all, I think it’s confidence. When I see you without your head up, I’m reminded of you talking on the damn phone to some stupid boy.”

Maybe some of you are thinking, “Big deal. Her head was down while she was talking. That’s what you do when you’re listening and concentrating.” But that’s not it at all. Having my head down symbolizes a lack of confidence. I’ve worked damn hard over the years to increase my confidence — to break free of the mentality of those church ladies from 16 years ago, who were trying to keep me…what? Humble? (Well, thanks for nothing, ladies. You made me think it was wrong to have self-assurance, and for that I’d like to travel back in time and kick you in the face.)

Why did I put up with someone who temporarily lowered my confidence? Someone who made me apologize for something I shouldn’t have been sorry for? I was naive, thinking that if I could just rationally explain where I was coming from, he would understand and everything would be okay again. Because, you see, I’m a peacemaker. I don’t like for people to be mad at me. I don’t like to argue, and I will go out of my way to prevent drama.

As uncomfortable as it was to take this mental trip back in time, it’s also incredibly important. You have to know how you don’t want to act, and what you don’t want to put up with, in order to make sure it doesn’t happen again.

The Power of Determination

Downsizing: Is It For You?