I was supposed to compile this information at the end of 2014, but better late than never! In over 12 years of blogging, I’ve never written a year-in-review post before. Here are my highlights from 2014:

January: Went through the process of changing my last name after getting married the month before. Attended SoupFest with Paul & Bryana. Toured the Darwin Martin House. Started a new job. February: Checked out Flurrious at Delaware Park. Traveled to Toronto, where Paul and I visited the Hockey Hall of Fame, the Royal Ontario Museum, and I reunited with an aunt I hadn’t seen in over 20 years. Attended the last meeting of the Lovin’ on Buffalo Book Club at Lobby Bar (I miss that group). Watched my friend Angela Keppel give a talk about the history of Buffalo streets at Forest Lawn Cemetery.

(Mini snowmen were created during Flurrious at Delaware Park.) 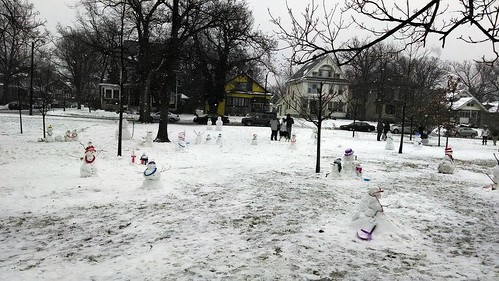 (Me and long-lost aunt Jeanne at her art show in Toronto.) (Me and Angela after she gave her talk at the cemetery.) 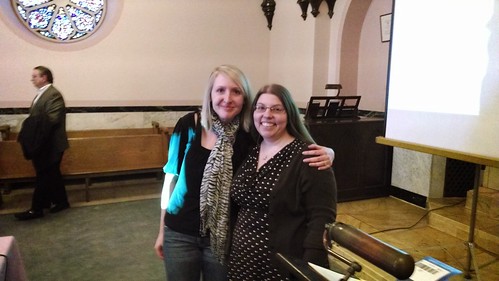 March: Took my mother-in-law to a Ladies of the Vine dinner at Providence Social. Went on a winery tour of the Niagara wine region and had lunch at the delightful White Linen Tea House. Attended a Buffalo Niagara 360 event featuring Buffalo Foodies. Went to the Buffalo Home Show. Saw my first movie at the historic North Park Theatre.

(Me, my mother-in-law Diane, and sister-in-law Stephanie at White Linen Tea House.) 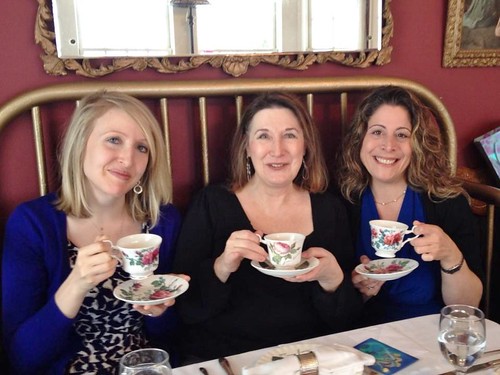 April: Volunteered at the Unyts Bucket List Bash. Attended a VIP preview party at the Mummies of the World exhibit at the Buffalo Science Museum (where Paul and I had our photo taken and later found ourselves featured in a Buffalo magazine “who was there” spread). Saw Damn Yankees at Niagara Regional Theatre. Checked out my first Dyngus Day parade.

(Me at the Buffalo Science Museum.) 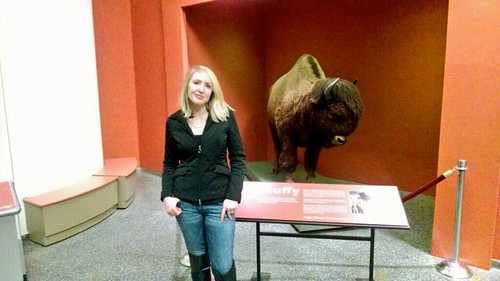 (This is the photo of me and Paul that made it into Buffalo magazine.) 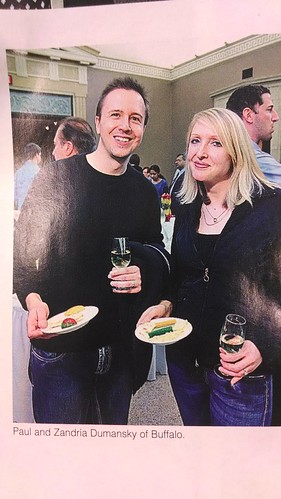 May: Flew to Virginia to visit my family. Paul started a new job. Drove to Penn Yan, NY to see friends of ours from DC who were vacationing there. Volunteered at the Ronald McDonald House (helped make dinner for residents, my second time doing so). Spent most of a Saturday outside: Participated in Hands Across Buffalo, walked through the Elmwood Village, enjoyed the sounds of Spring Porchfest, visited the Artisan Market at Canalside. Celebrated Memorial weekend at a lake house in Sunset Bay. Attended BuffaLoveFest at the Zoo for the second year in a row. Spent some time at the Greek Festival.

(Me and my sister Elissa at her house in Richmond, surrounded by her two large dogs.) 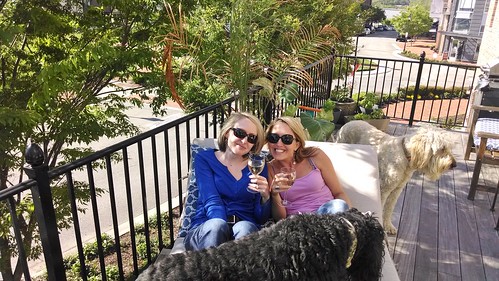 (My nephew Laine, in the best ultra-chill pose I’ve ever seen.) 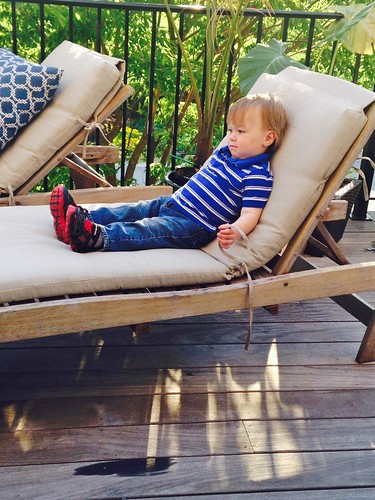 (Me and a girlfriend at a rented lake house in Penn Yan, NY.) 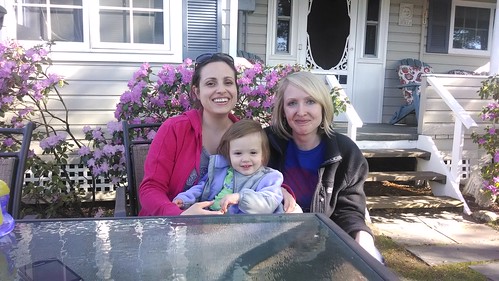 (Paul, on the far right, participating in Hands Across Buffalo.) 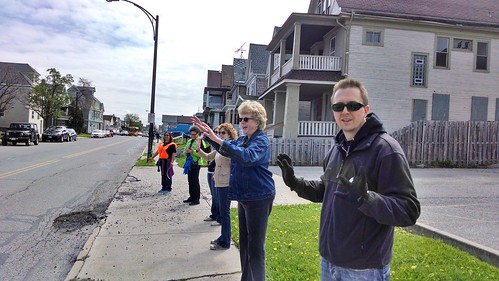 June: Paul and I decided we were ready to buy a house; met with our realtor for the first time. Went to a Bisons game. Celebrated my 34th birthday with dinner at Tappo. Traveled to Baltimore and Washington, DC to visit friends (on the final day, had such a good time with one friend at brunch that I narrowly avoided missing my train to the airport). Signed a contract on a house that we ended up not buying. Supported Paul while he ran the Corporate Challenge race at Delaware Park. Took the Buffalo Living Tour. Attended a fundraiser for Grassroots Gardens at Resurgence Brewery. Volunteered at City of Night.

(Visiting my friend Shannon in Baltimore.) 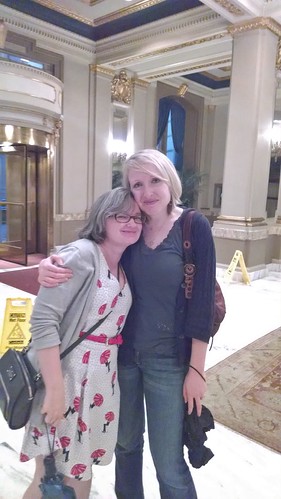 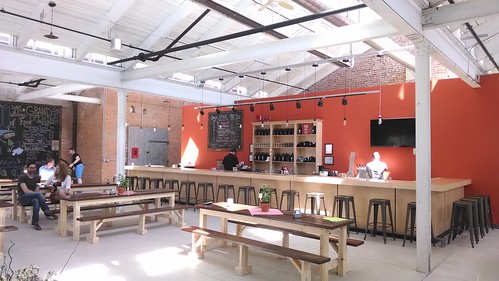 (This is a view of the crowd at City of Night.) 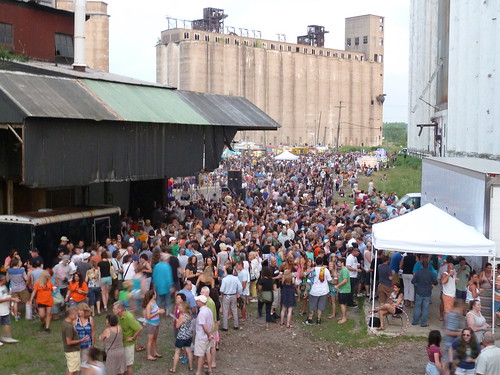 July: Returned to the lake house in Sunset Bay for Independence Day (they have a great fireworks display there). Toured a new exhibition at the Albright Knox. Upgraded from a double to a king-sized mattress (love!). Attended my first Taste of Buffalo. Saw my first show at ComedySportz. Participated in a Reading Invasion at Black Rock Heritage Garden. Celebrated Paul’s birthday with dinner at Encore. Celebrated my friend Nicole’s birthday with dinner at Templeton Landing and a show at Canalside. Went on my first Garden Walk.

(This guy in the suit gave us a tour of an exhibit at the Albright-Knox.) 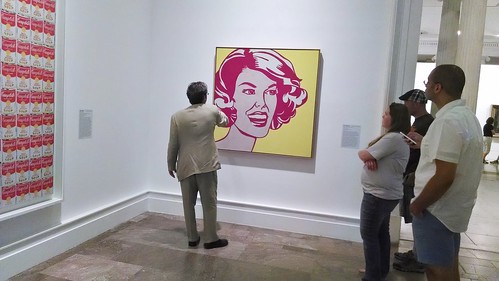 (I attended Taste of Buffalo with my husband and in-laws.) 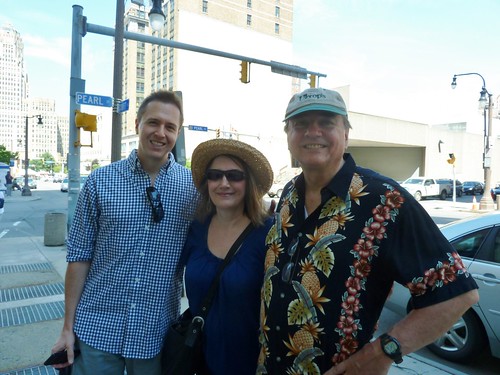 (This is what a portion of the Reading Invasion looked like. I was reading Some Girls: My Life in a Harem at the time, which was included in my 2014 reading list.) 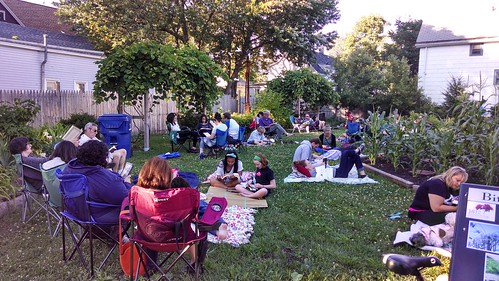 (Me at the Garden Walk.) 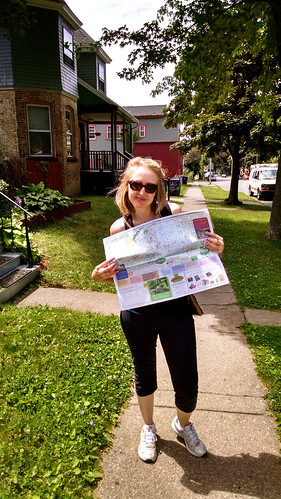 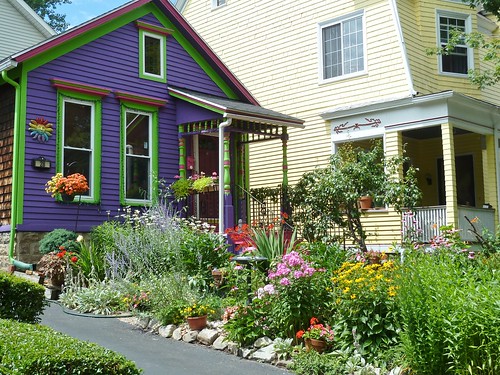 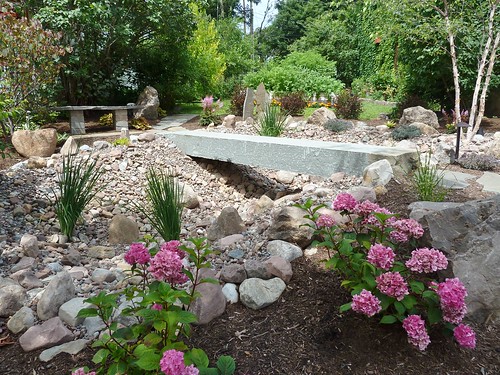 August: Entertained weekend visitors (two friends from DC). Attended a co-ed bridal shower at Pearl Street Grill. Partied on the Portico at the Buffalo History Museum for their final show of the season. Gaped in wonder at the beauty of Letchworth State Park (joined by my friend Jaclyn and her family – she wrote a great recap). Spent a full workday volunteering with coworkers for the United Way Day of Caring. Attended a second Bisons game. Put an offer on our current house and had the inspection done. Took a weekend trip to Cleveland and Columbus, OH.

(Me and my friends from DC on the bridge that separates the U.S. from Canada at Niagara Falls.) 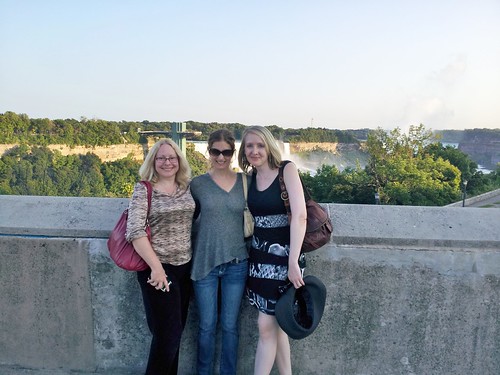 (Me and Paul at Letchworth.) 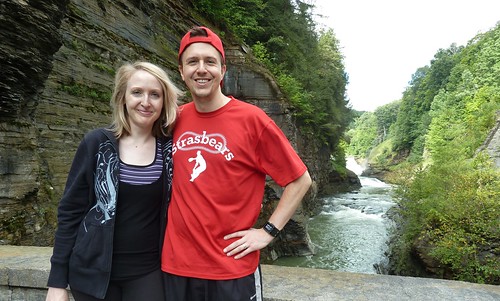 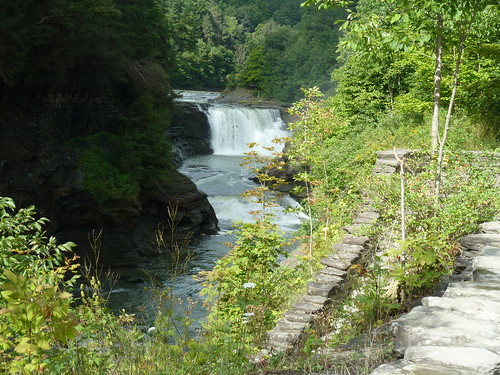 (This is me and Christina, a good friend I’ve known since childhood who now lives in Columbus.) 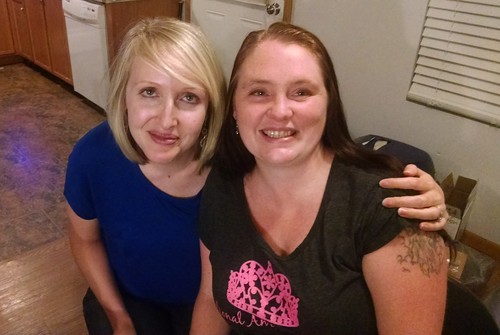 (Paul and me at the Rock & Roll Hall of Fame in Cleveland.) 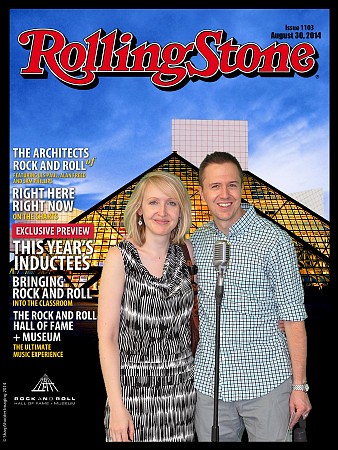 September: Attended the Buffalo Niagara 360 kickoff celebration. Checked out the Canalside Maritime Festival. Took a Lawless District Tour at Canalside with Buffalo History Tours. Went to an evening party at A Gust of Sun winery. Started my second Whole30. 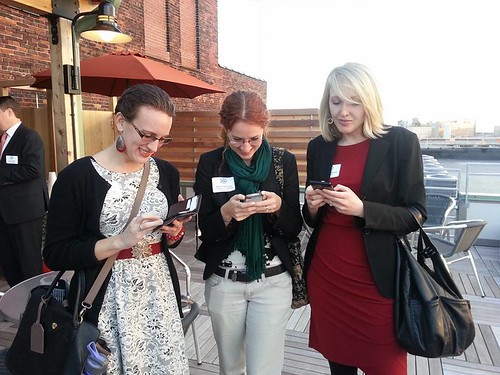 October: Visited my friend Jennifer (met her through social media!) at her house for the first time. Attended a wedding here in Buffalo. Was talked into going to a PartyLite party but didn’t buy a thing (I’m stubborn like that). Went to Tifft Nature Preserve with Jaclyn and family (she wrote a recap of that event, too). Attended my cousin-in-law’s baby shower. Started writing on this blog again after an almost three-year absence. (Yikes! I swear I was writing elsewhere in the meantime.) Shared what a day in my life looked like at that point in time (it’s already changed because I’ve since moved to a new house.)

(A day in my life used to include a walk that took me by these trees.) 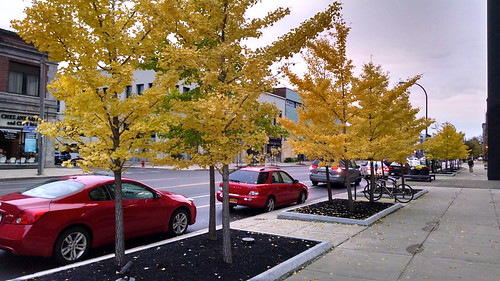 November: Bought a house! Dealt with new-house tasks (Internet installation, meter readings, address changes, moving, unpacking). Attended my second baby shower of the year (this one was co-ed at least). Traveled to Virginia to spend Thanksgiving with my family. 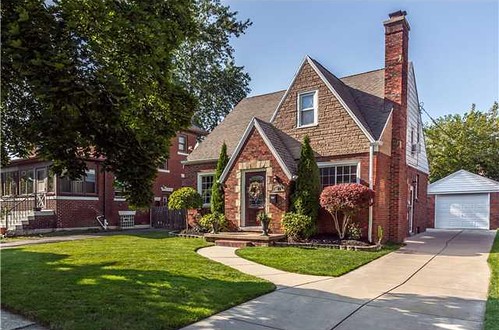 (This is me and my younger sister Angela on Thanksgiving.) 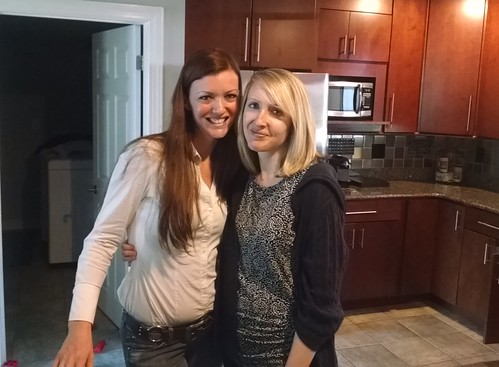 (This is the delicious holiday candy I made: chocolate-covered peanut butter balls and peppermint bark.) 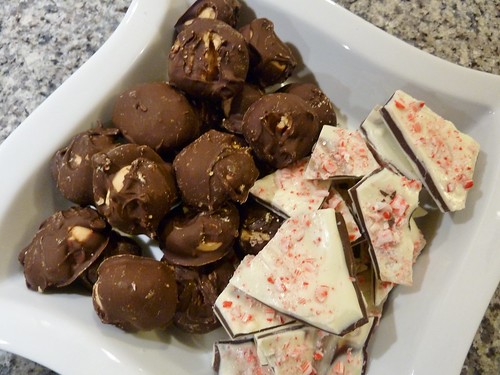 What was your favorite event of 2014?