I completed my third Whole30 last month, in January 2015.

For my first Whole30 in July 2012, I posted a blog entry every day with what I’d eaten that day. Before and after, I wrote about why I was doing it and did a comprehensive recap at the end. My first Whole30 was the hardest because it was brand new to me and I was battling an underactive thyroid at the time (I still take a pill every day for my thyroid but at least it’s under control now).

For my second Whole30 in October 2014, I wrote about why I was doing it again over two years later, but I decided to post weekly food wrap-ups instead of daily. I didn’t do a recap post at the end of that one.

For my third Whole30, I didn’t announce in advance that I was doing it or post my daily meals anywhere, but I did decide to write this recap. (Way to change things up, huh?)

Here are some questions that have come up in the past, or I’ve seen other Whole30’ers answer:

How was the Whole30, Round 3?
The third time around was mostly uneventful. I knew what to expect and I knew what I could eat. I had already identified some new paleo dishes during my second Whole30, so I pulled out the ones I like the most and made those again.

The first 4-5 days were unpleasant because I indulged in too much chocolate during the month of December. (In hindsight, it’s probably not a good idea to plan a Whole30 so far in advance because I was essentially giving myself permission to eat chocolate, knowing I wouldn’t have any starting in January.)

How was the temptation? Did you find it difficult to stick to the plan?
I’m going to be completely honest here: when it comes to decision-making, I find the Whole30 easier in a lot of ways than when I’m not on it. If I’m not allowed to have something, I don’t crave it. Since sweets aren’t an option for me, the permission button in my head – the one that asks “should I or shouldn’t I?” – just cuts off.

Sugar, gluten, legumes, dairy, alcohol. I can’t have it. The end. So I find something I can eat and I enjoy it because there’s a lot of tasty Whole30-compliant food out there.

During my periods of non-Whole30 eating, I do, of course, still practice restraint in my eating. I cut out most gluten in early 2012 (due to the aforementioned thyroid issue) and these days I eat mostly paleo. But I am more likely to say yes to the occasional indulgence – delicious desserts at work, pizza or beer with my husband, fried food at a restaurant – because technically there’s nothing telling me I can’t.

Did you feel deprived?
I don’t feel deprived on the Whole30 because you don’t restrict yourself to a certain number of calories or points. As long as you stay within the Whole30 food guidelines, you can pretty much eat whatever (and however much of it) you want.

I started making better food choices after my second Whole30 ended last October. Before then, even though I was eating mostly gluten-free I was consuming way too many corn tortilla chips. I also used half & half and stevia in my morning cup of coffee. (I drink decaf coffee during the week at work and regular on the weekends when Paul and I share a pot at home.) I haven’t had corn tortilla chips since last September and I only have cream in my coffee when I order it from a coffee shop (which has happened 2-3 times in the past four months). I’ve cut out stevia completely.

What did you eat?
I mostly took compliant foods from my two cooking lists (Top 25 Weeknight Dinners and Top 20 CrockPot Meals), or modified them to be compliant as needed. Turkey Satay Burgers with Broccoli Slaw is one favorite: 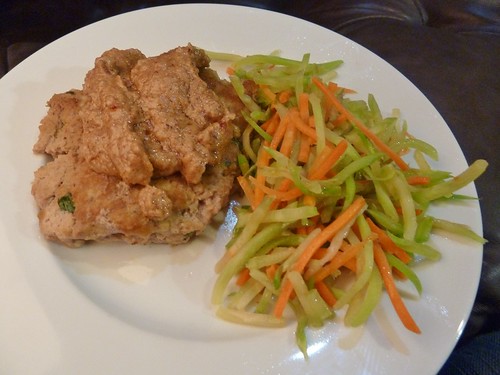 Since Paul wasn’t on the Whole30, I’d serve him side dishes of pasta and rice. For snacks I like shredded coconut, apples with almond butter, bananas, raw walnuts, and bags of frozen vegetables (mainly Brussels sprouts and broccoli, which I eat with a scoop of coconut oil mixed in because yum).

Any tips?
It’s very important I take enough food to work so I don’t find myself hungry with no Whole30-compliant options in sight. I’ll often leave food in my desk drawers for just such an emergency (a bag of shredded coconut is a great shelf-stable snack item). Hunger is the enemy of willpower.

How much weight did you lose?
I tend to lose 3-5 pounds whenever I do a Whole30.

What was the first non-Whole30 thing you ate after the month was over?
Paul and I attended a local Ice Festival the day after my Whole30 ended, where I had cream in my coffee and a small bowl of pumpkin bisque. I had a glass of wine with dinner that evening, plus a mug of cocoa with marshmallows. However, I was back on Whole30-compliant foods after that. I’d like to continue eating mostly Whole30 during the week with some breaks on the weekend.

Do you have any questions about the Whole30 I didn’t answer?