After owning this beautiful table for two months, I was finally able to sit down and eat a meal for the first time this weekend. Why did it take so long? I had a table but no chairs! 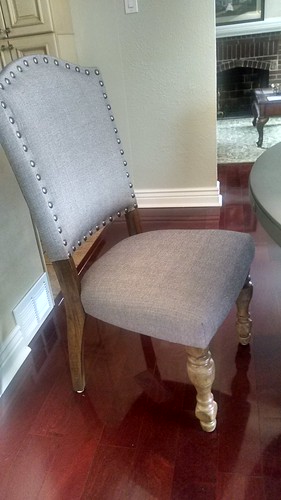 I looked for chairs online at the same time I searched for a table, but it was difficult to picture how they would look and feel in real life. I had other reasons for not wanting to buy chairs online. First, unlike the table (which was delivered and put together by two deliverymen), the chairs would arrive in boxes and we’d have to put them together ourselves. Second, even if I found free shipping online, I would have to pay to ship them back if I didn’t like them (or I might feel pressured to keep them even if I didn’t love them). Third, I read a lot of bad reviews about chairs falling apart or not looking as good as they did in photos.

We decided to look for chairs in local furniture stores so we could see them in person before making a purchase. We ended up finding these pretty quickly, but it took two months – twice as long as expected – before they showed up at our door. We originally planned to pick them up from the store (to save the $100 delivery fee), but when we received the call to come get them (almost five weeks after the initial order), we discovered our sales associate had transposed a few numbers and accidentally ordered the wrong chairs.

To the store’s credit, they did their best to make things right. The correct chairs took about three weeks to arrive this time around, and they agreed to deliver them to us for free. Much easier than taking two cars to the store and trying to jam them between the seats.

It’s been quite a long time since I’ve eaten meals regularly at a dining table (we haven’t had one since we moved to Buffalo almost two years ago, and we rarely used the borrowed set we had in DC because we found the wooden chairs so uncomfortable). I look forward to sitting at a solid surface without balancing a plate on my lap on the couch. 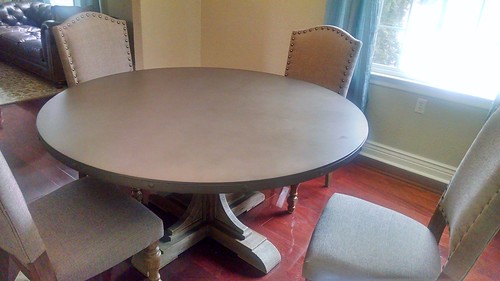 Another advantage to having dining chairs: it will be easier to have guests over for meals. My in-laws came over last night and we broke in all four chairs at the same time.

The room is pretty much done at this point — we have the table, chairs, and curtains. I’d like to get some new artwork for the walls (I have one piece hanging on the wall right now but I’m not loving it’s placement in a dining room), and I’d like to have the overhead light fixture put on a dimmer. While a bright light is sometimes welcome, it will be a hindrance to future romantic dinners.

My Estate Sale Finds (AKA Hunting for Treasure)

Why I’m Having Second Thoughts About Homeownership