After reading an article in the New York Times — My Dinner With Longevity Expert Dan Buettner (No Kale Required) — I immediately put in a library request for the author’s book.

You should know I’m not a fan of diet books. There are too many. Whether someone eats paleo or vegan, has no food allergies or requires gluten-free fare, or like most people they fall somewhere in between, it’s my belief that real food is the answer for everyone. Most (if not all) of the food we eat should be minimally processed, and if you buy something from a box or can, you should recognize the ingredients.

I like The Blue Zones Solution: Eating and Living Like the World’s Healthiest People because it’s not a “here’s how to lose weight” diet. The food recommendations are based on what centenarians – people who live to be 100 years old or more – eat. Attempting to discover how they live so long, National Geographic researchers focused on the five places in the world with the highest number of centenarians: Okinawa, Japan; Sardinia, Italy; Nicoya Peninsula, Costa Rica; Ikaria, Greece; and Loma Linda, California.

I found this book at the right time because I’ve been looking for…I don’t know…something else. I’ve done the paleo thing off and on for years (I’ve completed three Whole30s since 2012), but that way of eating never felt sustainable for the long term. I’ve been eating a lot of meat, and I got to the point where I felt like I was eating too much of it.

Centenarians in the five Blue Zones don’t eat a lot of meat. Research has shown that it’s not vegans or meat eaters who live the longest, but pescetarians – those who mostly abstain from meat but add in seafood once in a while.

After discussing the Blue Zones research with Paul, we decided to make a joint effort to follow the guidelines (I cook pretty much all of our meals, so I wanted to make sure he was okay with the change). Luckily, I already enjoy most of the food that the Blue Zones recommends (except raw tomatoes…I’m 35 years old and I still won’t consume tomatoes unless they’re cooked). We just need to eat more of it, focusing on vegetables and beans instead of meat.

Some of the food I buy is organic, but I’m not militant about it. I’m just happy if I’m eating broccoli, carrots, and apples instead of Cool Ranch Doritos, no matter where they came from. (I haven’t actually consumed any Cool Ranch Doritos in the past fifteen years.) Paul and I actually prefer plain tortilla chips, but we’ve agreed to no longer keep them in the house since we tend to gravitate toward those for a snack instead of healthier options.

Unlike the rigid Whole30 – which has good reasons for being rigid – our new approach will be more flexible. If we eat at someone’s house and they’re serving something we don’t normally eat, like beef or chicken, we won’t turn it down (even centenarians in the Blue Zones eat small amounts of meat occasionally, in addition to seafood). However, you always have permission to turn down things you are opposed to consuming, like dessert if you abstain from sugar. Or Cool Ranch Doritos. Please don’t eat those.

Around the time I started reading the book, I heard from a neighbor that many people on the street we live on are members of the Porter Farms CSA, and they have a long-established delivery schedule in our area. I had put off joining a CSA because I thought the pick-up locations might be inconvenient, but what’s easier than fetching my CSA delivery just a few doors down from my house?

This particular CSA was halfway through its 20-week growing season before I joined, but at least I’ll have it for the next 10 weeks. One motivation for joining – other than the convenience of a recurring organic food delivery – is knowing it would force me to consume foods I never (or rarely) purchase myself.

That was certainly the case with my first delivery, which included a watermelon with yellow flesh, and peppers I’d never cooked with before (cubanelle, poblano). 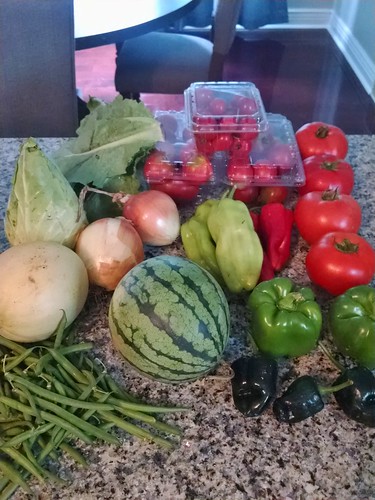 Our second delivery included such things as bok choy (which I love but had never cooked with before), and kohlrabi (which was completely new to me).

And of course we get a lot of raw tomatoes. Four different types! I core and freeze them so I can use them for soups. I use canned tomatoes in soups quite often, so the addition of a raw tomato or two shouldn’t be recognizable.

Of course there are other aspects to becoming a centenarian than just the foods you eat, and the book addresses those factors as well, like meaningful relationships with others and regular exercise (especially long walks – I loved when Buettner pointed out that none of the centenarians are CrossFit athletes and they’ve likely never belonged to a gym).

These are the ten food guidelines spelled out in the Blue Zones recommendations:

1) Plant Slant: 95% of the food you eat should come from a plant or plant product. Favor beans, greens, yams and sweet potatoes, fruits, nuts, and seeds. The best longevity foods are leafy greens such as spinach, kale, beet and turnip tops, chard, and collards.

3) Fish is fine: Eat up to three ounces of fish daily.

5) Occasional eggs: No more than three per week.

6) Daily dose of beans: Eat at least half a cup of cooked beans daily.

8) Snack on nuts: Eat two handfuls of nuts per day.

9) Sour on bread: Replace common bread with sourdough or 100% whole wheat bread. (Note: I still plan to eat gluten-free all/most of the time, so I won’t be adopting this one.)

10) Go whole: Eat foods that are recognizable for what they are.

Could you eat like centenarians in the Blue Zones do?

How I Make a Meal Plan