Why I Drive An Ugly Car

My car – a 2002 Honda Civic EX coupe – is ugly. While I would prefer the ugliness to be less pronounced, it’s over thirteen years old. It’s reliable, rarely needs repairs, the insurance is cheap, and since I bought it with cash over eight years ago I’ve never had a monthly payment. 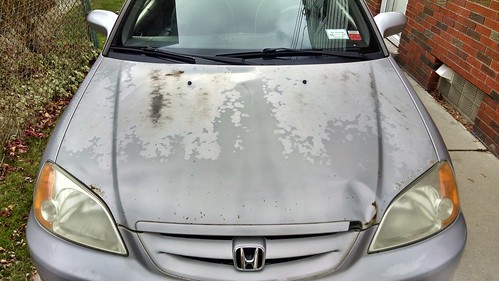 (The hood damage was caused by tree branches falling on my car when it was parked on a street in DC.)

In addition to the hood damage, both bumpers are scratched due to years of parallel parking and the rear passenger side is dented (that damage was there when I purchased the car, it just became more pronounced over time and rust developed where it wasn’t before). 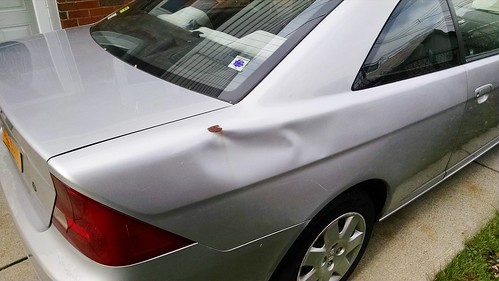 You don’t have to like my car. If I were to buy another used car right now, obviously I wouldn’t choose this one. But I don’t find it horrendous, and I’m not embarrassed to be seen with it. The advantages of keeping this car far outweigh the negatives.

For a lot of people, transportation expenses are a noticeable deduction from their paycheck. For my husband and me, vehicle expenditures are a very small part of our monthly spending. We recently pre-paid our car insurance for the next twelve months, which cost us a grand total of $444. Averaging that out to $37 per month, we pay way less than $100/month for insurance and gas. When we took the car in for a state inspection in October, the only thing it needed was an oil change.

We don’t plan to upgrade our vehicle until we have to: if repairs start to cost more than the car is worth, or if we need to make room for a car seat. Many years ago my sister drove a two-door vehicle with a child seat in the back; I know from experience that it isn’t easy or fun. As of right now though, we don’t have a pressing need for four doors.

When we do upgrade our car, it will be pre-owned and we’ll pay for it with cash. As my financial guru Mr. Money Mustache advises, never ever borrow money to buy a car.

Not only do my husband and I drive our car without embarrassment, it’s the only one we own. Earlier this year we got rid of our second vehicle and became a one-car household. (The car we sold was even older than the Civic and didn’t run nearly as well. When we were told repairs would exceed the car’s worth, it was the impetus we needed to get rid of it. We had barely driven it for the year leading up to its being sold, and I was more than ready to turn in the license plates and remove the car from our insurance policy.)

Becoming a one-car household took longer than it should have – I had been lobbying for it ever since Paul and I moved in together four years ago. We lived in DC back then and used Metro most of the time, and ever since moving to Buffalo in 2013 I’ve either walked or taken public transportation to work while he drives the car. Owning two cars just isn’t a necessity for us.

(Full disclosure: While my husband drives our Civic to work most of the time, his employer requires him to periodically visit other offices in New York state – he goes as far as Albany, which is four hours from Buffalo. When he travels long distances, most of the time he borrows one of his parents’ three cars, all of which are newer than ours. The Civic hasn’t given us any indication it wouldn’t make the trip, but when he’s on the road for a long period of time he feels more comfortable driving a newer vehicle. If it wasn’t for his parents’ generosity, it’s quite likely we would’ve had to replace the Civic by now.)

My husband and I appreciate our old, ugly car because it symbolizes a commitment to our financial goals. If we wanted a newer, prettier car, we’d go out and get one. We hang on to the one we have because we’d rather have our money in an investment account instead of sitting in our driveway.

It’s the same reason we eat most of our meals at home instead of frequenting restaurants. We don’t constantly upgrade our electronic devices. We don’t shop for pleasure; if we need something specific we go out and search for that particular item. When I go to Target, I have a list and don’t deviate from it (this doesn’t involve willpower; once you’re accustomed to following a list you no longer feel the need to browse aimlessly through aisles of clothing and home décor). We’re committed to reducing our expenses so we can use that money later, on things which actually make us happy.

I live this way because at some point in the future I’ll be road-tripping around the United States with only a loose itinerary. I’ll be living overseas. My time will be my own.

When that day arrives, I will be so, so glad my ugly car helped make those dreams possible.