Downsizing: In the spirit of minimalism, Paul and I spent a few hours last weekend taking pictures and creating listings on eBay and Craigslist. I like that we’re able to downsize our possessions gradually as the mood strikes (usually the mood strikes me, but Paul approves of my efforts, especially when he sees the cash roll in).

We made $1,125 from Craigslist in 2015. A big chunk of that ($550) came from selling a washer/dryer that the previous owners of our house left in the basement — we already owned a newer set so we didn’t need theirs.

Bullet Journals: While I understand that some people prefer paper calendars and planners over electronic versions, I don’t get the appeal of bullet journals. They seem very labor intensive. Why would I want to constantly hand-copy items from one page to another? Also, when the journal is full, it gets put in a stack, or lined up on a shelf – it’s just something else that takes up space.

Some people use a bullet journal as a type of scrapbook, capturing movie stubs, airline tickets, and other memorabilia. I don’t save those things, so I have no use for a receptacle to store them. I put those bits of paper in the trash. I record the outings on my electronic calendar instead, where I’m able to recall memories of the event just as easily as if I were to look at something physical.

My preference is Google Calendar, which I’ve used religiously for the past seven years. I access it on computers as well as my phone. In addition to recording future appointments and setting up recurring reminders, I also use it for:

Paul’s eye surgery went great. He diligently followed the prescription-eyedrops regimen, he’s had two follow-up appointments, and everything appears to be healing nicely. This is the very last photo of him wearing his glasses before they were donated: 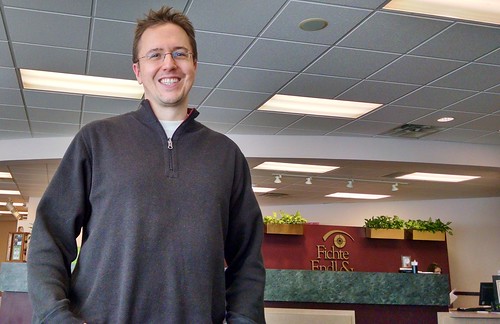 Currently Reading: Stuff: Compulsive Hoarding and the Meaning of Things, by Randy Frost & Gail Steketee. It’s fascinating to read about people who are so completely opposite from me.

Currently Watching: I knew pretty much nothing about the Beach Boys, but Love and Mercy was super interesting (Brian Wilson was controlled by a crazy psychologist!).

Currently Cooking: A meal that I return to over and over again is Cauliflower Pasta Puttanesca. Recently I’ve started making it even easier on myself and using frozen cauliflower instead of chopping fresh florets. I just make the sauce and once it boils, I add a l-pound bag of cauliflower. Once it’s thawed and heated through, the sauce is ready to go. Simple and delicious.

None of them were “bad” guys. They usually aren’t. Rebecca Woolf wrote a powerful piece about various forms of sexual assault she’s experienced. She makes the point that boys aren’t always to blame, and gives reasons why. I was particularly interested when she mentioned being assaulted by a male friend; she pretended to be asleep and continued to be his friend afterward, never confronting him about it. I had something similar happen to me, which I haven’t thought about in a long time: when I was in my late teens, I attended a party, got really drunk (and physically sick), and fell asleep in a male friend’s bed. Later, I woke up when I felt his hands on me. I started moving around to let him know I was awake and must have said something along the lines of “Stop” or “No,” because he left me alone (which was lucky for me, because I wasn’t in good shape to fight back). I never said anything about it, we went on being friends like nothing had happened, and he never tried anything again. I’m sure many women have examples like this.

15 Lessons I Learned from Traveling Around the World: Since I dream of living overseas, I enjoyed this list (particularly #1 – Continuous travel is so much cheaper than living “real” life).

A Couple Bought An Abandoned French Chateau From The 1700s: Have you guys heard about this renovation? I’ve been following along with the progress and would love to see it in person one day.

How Netflix Reverse-Engineered Hollywood: A long but entertaining read, primarily focused on how Netflix created their micro-genres.

What is Sustainable Fashion? First, Fabrics. This blogger is the one who introduced me to the documentary I mentioned in the last Random Friday post, The True Cost (available on Netflix). Her post has some great tips for people looking to make more ethical clothing choices, and it’s not just about buying brand new. Remember: “We can stop buying new altogether, sticking with second-hand/vintage, or simply not adding anything else to our wardrobes, wearing and taking care of what’s already in our closets. We can re-use what we have, tailoring things to fit, coming up with innovative ways to wear things we already own. And we can simply get by with less; we can have less, buy less.”

Three years ago: 10 Reasons to Move to a Rust Belt City. “When it comes to Buffalo’s architecture, my favorite examples are the homes. There are a ton of houses in the city which are over 100 years old — they’re gorgeous. They have a history and character that’s impossible to find in newer structures.”

Six years ago: I’m Turning 30 and I’m Okay With It. This was written three months in advance of my thirtieth birthday. “Of course there are a number of things I wish I would have done by now that I haven’t, but those are my own expectations. I don’t feel burdened by anyone else’s thoughts about where I should be or what I should have accomplished by now.”

Seven years ago: I’m Discontent and Trying to Get Over It. “Dissatisfied, moody, depressed, overly quiet, morose. There are many words and phrases one can use to describe a general state of discontentment. In my case, I am discontent when every day starts to feel exactly like the day which preceded it — walking the same routes, seeing the same things, being responsible for turning out the same results over and over again.”

Eight years ago: Change Your Life: Study Abroad. “After spending five months in a foreign country, I can say firsthand that it’s an entirely different experience to stay in an unfamiliar place for a long period of time, as opposed to spending just a few days. As nice as it is to spend a few days in a foreign city, it’s inevitable that you’ll feel rushed as you go from one thing to another, or you’ll leave something out because you just don’t have the time.”

Thirteen years ago: I Stole Reflectors. “When I was about 16 and hanging out with my girlfriends, for lack of anything more interesting to do, one of the girls came up with the notion to steal reflectors off the side of the road. (You know, those reflectors that come in colors of red or blue, round disks mounted on a metal stick and stuck in the ground.) These are used by a lot of people in the country to mark the top of their driveways. Since country roads don’t have street lights, reflectors are helpful so that you (or your visitors) won’t drive past one of those hidden driveways in the dark.”