I was in DC earlier this month for a long weekend. As always, I packed my schedule full of friends I wanted to see and had a grand time. Whenever I go back for a visit, I find myself asking, “Why did I ever leave?” But then I have to sternly remind myself that when I’m there as a visitor, of course it’s fun – I’m not headed off to a cubicle job, fighting a rush-hour Metro commute, circling endlessly to find free street parking, or paying rent on an old, unrenovated apartment that costs twice what our mortgage does.

Yes, DC is where my best friends are and I miss them dearly. But the reason I like it better now than I did when I lived there is because it’s an escape. I no longer have to deal with the negative aspects and instead I get to reap the benefits: friends who rearrange their schedules to hang out with me, using public transportation during hours when it’s not busy, strolling past the White House on my way somewhere else, popping into a free museum just because I happen to be walking by and have a bit of time to kill.

I will always love DC, but the reason I’m able to look at the city with such fondness is because I left. 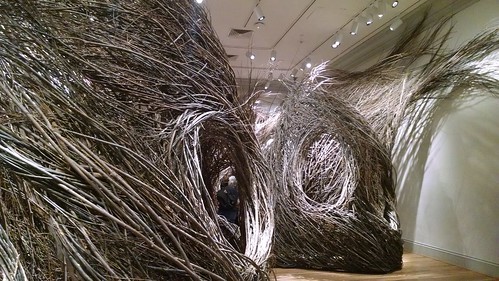 Currently Reading: Have a Nice Doomsday: Why Millions of Americans Are Looking Forward to the End of the World, by Nicholas Guyatt.

Currently Watching: I rented Suffragette from the library, which is about British women campaigning for the right to vote. I knew the right to vote was a struggle, but I never knew there was such underhanded efforts by men to keep it from happening (like doing undercover surveillance to discover what those dangerous women were up to). It was pretty intense: multiple arrests, hunger strikes, violence, bombs, suicide. Very interesting, and superbly acted by Carey Mulligan.

Currently Cooking: We’re celebrating Easter a day early tomorrow and having a meal with my in-laws and some friends. I’m contributing Southwestern Salsa and Black Rice Salad with Edamame, Walnuts & Lemon Vinaigrette.

Doing a TED Talk – The Full Story. A TED presenter decides to do his talk on procrastination after he, well…procrastinates about preparing for his presentation. This article is a bit long, but also funny (the graphics are not to be missed). It’s also an interesting look at how people who need to give a very public 18-minute talk go about preparing.

Why I’m Returning to My Maiden Name. Emily decided to legally return to her maiden name after using her husband’s last name for several years after getting married. I thought it was interesting, especially since the decision to change my own last name wasn’t one I took lightly (and was certainly not a definite, like it is for a lot of women).

2020 Vision. Janet puts herself on an allowance and resolves to pay off her six-figure student loan debt by 2020.

Make Money & Travel. I enjoyed reading my way through these stories of people who make a living while traveling around the United States.

Open Letter to the Guy Who Refuses to be the Sole Breadwinner. I’ve read Penelope Trunk for many years, and she’s usually interesting, if a bit divisive (she also tends to stereotype a bit, as you can see in this post). I’m pretty sure we all know women who would continue to work even if they didn’t need the second income.

One year ago: My 20 Favorite Books About Religion (or the Lack Thereof)

Eight years ago: Q is for Quarterlife.”My quarterlife crisis was all about searching. I spent many hours on the internet, looking at career options, reading about people who had made big, life-changing decisions. I wanted to know how and why they ended up where they did.”

Thirteen years ago: Who Am I? It’s nice to know that even back then, I identified as a minimalist. “I guess I consider myself a minimalist. I don’t like a lot of clutter and I try not to keep too many unnecessary things. I don’t hold on to knick-knacks unless they’re from my childhood, and I’ve never collected anything.”