Back when it was summer in Buffalo (not cold and snowy like it is right now), a giant duck came to visit. Many people traveled downtown to see it. 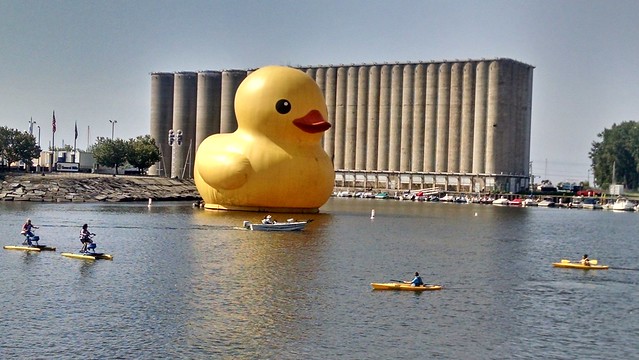 It wasn’t until after the presidential election that I realized I must gravitate toward bloggers who share my political views, because the only political posts I saw in Feedly after the election were written by Hillary supporters. I assume I must follow some secretive Trump supporters, but if so, none of them owned up to their voting choice with a celebratory blog post.

Here are four of those stand-out posts I wanted to share:

I’m Disappointed That Hillary Lost. But I’m Terrified That Trump Won. “If you ridicule a disabled person in my home, I would never speak to you again, much less think that you should be president. Someone saying that we should ‘grab women by the pussy’ has no place in my life. Someone who said that Mexicans are rapists is not someone who I would want to silently share a subway car with. If you said shit like that, I wouldn’t want you to lead a fucking parade, much less my country.”

I’m a Straight, White Person and Even I’m Scared. “A misogynist, racist, xenophobic reality TV star [is] going to be our next president. I’m fortunate that I’ve never been diagnosed with a fatal disease, but I wonder if this is what it’s like. There was a growing anxiety that something was wrong, a confirmation of the diagnosis, extreme fear and sorrow, then acceptance, and finally resolution to fight and get through the awful near future as well as I could. America had been diagnosed as Donald Trump positive.”

A Letter to My Children About the Election. “The election of 2016 resulted in the elevation, to the highest office in the land, of a man who has openly bragged about sexually assaulting women, who has mocked the disabled and our veterans, who has built his empire on the backs of working people, who has gotten rich by refusing to honor his contracts with small business owners, who is proud of not paying federal taxes – that means he’s proud of not playing by the rules that Daddy and I have to play by and that you will one day have to play by – who has threatened to tear apart families, build walls, and turn away refugees (the ‘huddled masses yearning to breathe free’ that our Statue of Liberty vows to welcome) because of their religion. These are not the values of our family.”

Minimalism: A Documentary About the Important Things. You guys know I’m a big proponent of minimalism. I’ve been reading The Minimalists for years and was excited when their documentary hit Netflix on December 15. Highly recommend this one.

Bag It! Really liked this. Paul and I kept hitting the pause button as we watched so we could talk about it.

Going Clear. I’ve read a number of anti-Scientology books, and one of the best is Going Clear: Scientology, Hollywood, and the Prison of Belief. I highly recommended this documentary for anyone who is interested in knowing more but doesn’t want to spend time reading a book.

Before the Flood. Leonardo DiCaprio’s documentary on climate change. I watched it for free on YouTube when it first came out, but I believe it’s currently available On Demand via the National Geographic channel. I liked but didn’t love it, but it’s still worth watching.

Lovelace. The only title on this list that isn’t a documentary, but it is based on a true story. I’d heard of Linda Lovelace and Deep Throat, but didn’t know anything about her life before I watched this.

Class Divide. I found this film very thought-provoking. The documentary provides “a look into gentrification’s effects on one neighborhood in New York City. [It] examines the massive changes in the Chelsea neighborhood in Manhattan, spurred by the development of the High Line public park, looked at through the eyes of teens in West Chelsea. On one side of 10th Avenue, there are disadvantaged teens who live in the Chelsea-Elliot housing project, and on the other side, wealthy teens who attend The Avenues: The World School, a private school that costs more than $40,000 per year.”

Let’s Hold Hands, Take a Moment of Silence, While We Numbly Watch the Effects of Climate Change. “No flights. No new computers except once every four years or more. Get solar panels and cut out your electric bill completely. No new purchases of anything that emits CO2 in the production. No beef. Eat local. Bike everywhere. Live totally differently. What it takes to change is nothing short of drastic. Instead, we’re drinking the last bottles of champagne on the Titanic. Sorry, kids! Should we have been putting you in lifeboats? Dude, later, I promise.”

Everything We Love to Eat is a Scam. “That extra-virgin olive oil you use on salads has probably been cut with soybean or sunflower oil, plus a bunch of chemicals. The 100% grass-fed beef you just bought is no such thing — it’s very possible that cow was still pumped full of drugs and raised in a cramped feedlot. [Y]ou’re not getting the sushi you ordered, ever, anywhere, and that includes your regular sushi restaurant where you can’t imagine them doing such a thing. Your salmon is probably fake and so is your red snapper.”

The Answer Is Never: Rewriting the False Narrative of Childlessness. “We so rarely hear from those who really choose to be childless, and there are few essays from women who don’t regret having had an abortion, who wouldn’t have been ‘ready’ at a later age, who had the money for IVF and childcare but who chose not to go there. The mainstream conversation is colored by if-arguments…I don’t have any if-arguments…I simply never wanted to have children. Not when I was 20, not when I was 30 and not today.”

Why Elizabeth Gilbert’s and Glennon Doyle Melton’s Divorces Freaked Me Out. “I think I was not made for marriage. I am a mostly selfish person whose default mode is autonomy. I do independence really, really well. I love people, I’m fascinated by people, but I also have too much going on in my own head to ever be fully devoted to anyone else. Being single and happy would be easy for me, I’m certain of it. That’s one of the reasons I stay.”

Zero Waste Bloggers: The Millennials Who Can Fit a Year’s Worth of Trash in a Jar. “Their neighbors may look at them askance, perhaps, or as extremists. The early adopters of rooftop solar power a few decades ago were viewed in the same way. Now they look like visionaries. I think the zero-waste-istas are in a similar place, showing the rest of us what’s possible, spreading the word. Ten years from now, they will seem much more mainstream.”

I’m a Falconer – There’s Nothing Like Watching a Bird You Trained in Action. “Every time you release a hawk for a hunt, there’s a chance you’ll never see her again. You spend time crafting something beautiful, and then you let it go.”

Toronto Family Ditches the City to Take Over a 1960s Vintage School. “First they had to make the school livable. They arrived to find homework assignments still pinned to classroom walls, abandoned skipping ropes and a box of trophies from the 1970s. They dealt with the alarming brown sludge bubbling out of the plumbing in the boys’ bathroom and scoured every surface multiple times.”

One year ago: Why I Drive An Ugly Car. “My husband and I appreciate our old, ugly car because it symbolizes a commitment to our financial goals. If we wanted a newer, prettier car, we’d go out and get one. We hang on to the one we have because we’d rather have our money in an investment account instead of sitting in our driveway.”

Three years ago: How to Get Married in Buffalo. “I was adamant that we keep the event as stress-free as possible, and I’m happy to say we accomplished that. There were a total of six people in the room: Paul and I, his parents, the officiant, and a photographer. Here’s what we didn’t have: a bridal shower, bachelor/bachelorette party, or a gift registry.”

Twelve years ago: Signing Off From Amsterdam. This is the last post I wrote from the Netherlands, after spending five months there on a college semester abroad.