I planned to write this post months ago, way in advance of our move. When I know I have a lot to say, the thought of starting feels overwhelming. But now the event has happened and it’s time to give everyone an explanation.

My husband and I left Buffalo at the end of August and returned to Washington, DC. We lived in DC before we moved to Buffalo four years ago, and it’s where we decided to return.

I was really excited to move to Buffalo in 2013. We planned the move for over a year before we actually did it. I armed myself with research, read a ton of articles, and made lists of places I wanted to see and events I wanted to attend. I even started a separate blog dedicated to Buffalo (defunct for several years now).

Given all that, I’m sure some people will wonder why we decided to sell our house and leave Buffalo behind. I could revisit the long list of pros and cons we made during our “should we go or should we stay?” conversations, but one factor stood out above all others: Community.

We missed our community in DC.

We didn’t expect to immediately find the same number of close connections in Buffalo that we had in our former city, but neither did we expect it to be as difficult as it turned out to be.

To be fair, we met a lot of very nice people. Some were brand new to both of us and others were friends of Paul’s from his younger years. All of these interactions were enjoyable. The problem was, we never felt like those interactions resulted in close relationships.

Many people who live in Buffalo have lived there most or all of their lives. This observation doesn’t apply to every Buffalonian, but in our personal experience, it seemed like most people we met already had enough friends. They were nice to us, and we might hang out once in a while and have a swell time, but with very few exceptions, we weren’t being invited to backyard cookouts or casual dinners.

We spent a lot of Saturday nights hanging out with each other because we didn’t really have anyone with whom we felt close enough to extend an invitation.

I do place some of the blame on myself, because I’m an introvert and it’s difficult for me to invite someone to hang out if I don’t know them very well. I did extend invitations in Buffalo, though (at least in the beginning, for the first few years when I was trying my best to establish a new group of friends). It’s just hard to keep putting yourself out there when the effort isn’t returned.

I went out to lunch several times with two ladies I met through a book club. At one point I suggested another lunch, and over a period of weeks we went back and forth on which date would work. After they rescheduled several times (perfectly understandable), I jokingly said I was stepping back from trying to coordinate the scheduling and they should let me know when a particular date would work for them. The three of us never had lunch again.

There are other examples of ladies I met in person after connecting through social media, and I’d see them solo or we’d go on double dates with our husbands. These outings mainly happened during the first two years after we moved to Buffalo when I was making more of an effort to reach out. But again, I felt like those outings happened because I initiated them. I waited for the invitations to be reciprocated, and when they weren’t, I stopped being the initiator.

I’m not saying these examples had a direct impact on our departure; our decision to leave Buffalo was wrapped up in many different factors. But this lack of inclusion did contribute to the dearth of community I’ve been talking about.

Like I said, there were a few exceptions. I saw Bryana quite a few times, but we drifted apart once her schedule got crazy with work and business school, and then she had a baby last year.

And of course there’s Jaclyn, who I’ve mentioned before. I still find it amusing that the closest friend I made in Buffalo was a fellow DC transplant. We’d meet up and moan about our mutual desire to make more friends, but we both found it extremely difficult to establish deeper connections with people who seemed content to keep our friendships superficial. Jaclyn moved back to DC a year before I did, and I encourage you to read this post she wrote about finding her way home again.

Another factor in feeling part of a community is proximity to family. We had that in Buffalo with my in-laws, who only lived a mile and a half from us once we moved out of the downtown area and bought our house. The four of us spent many hours together, and they were the single biggest factor in whether we stayed in Buffalo or not, as Paul and I both knew we’d feel awful about leaving them behind (we knew they assumed we’d moved to the area for the long term).

On the flip side, my parents, two brothers, two sisters, two brothers-in-law, and five nephews (plus another baby due in November) all live in Virginia. It takes a few hours to drive from DC to my closest relative, but the option is there and in the past I’d regularly leave the city to visit family on weekends and attend special events. I’m especially close with my sisters and it was tough only seeing them twice a year once we moved away.

Here are some additional factors which contributed to us moving back:

In the end, our choice to leave Buffalo was never about anything we actively disliked. The city contains numerous amazing destinations and activities; people move there every day and do cool things and start exciting new businesses.

I still follow The Buffalo News and read local blogs. I proudly display Buffalo-themed art. I know I’ll return over and over and eagerly seek out what’s new and what’s changed since my last visit. I will always look back fondly on the four years I spent there.

The past five weeks since our return have been packed: there have been lots of get-togethers with friends, and a bunch of my Virginia family members drove up to visit over three consecutive weekends in September. I joined a group of eco-minded women and have attended one meeting so far, with more on the agenda. There have been free museums and festivals and wine on our building’s roof deck. My calendar is filling up again and that makes me so happy.

I needed to get back to my people. My community. 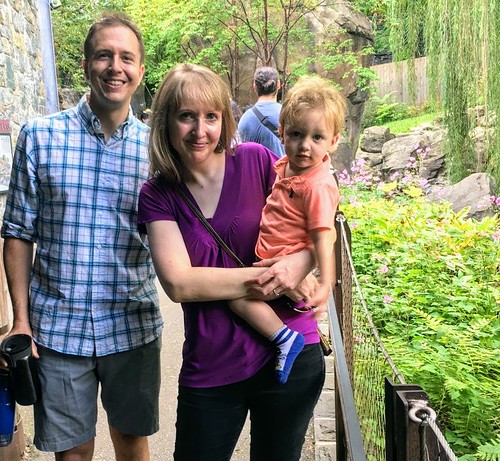 (Paul and me at the National Zoo last month, with our nephew Hunter.)

Moving to Buffalo: Pros and Cons